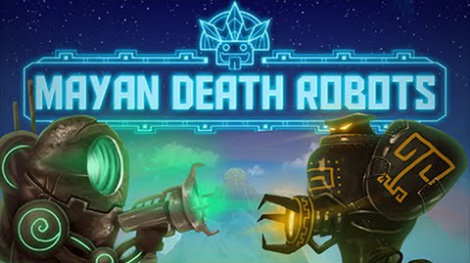 There are only so many times you can listen to those crazy Mayan predictions without crying wolf, but the credible folks at Sileni Studios in Belgium promise this one’s real: Mayan Death Robots is duelling its way onto PC via Steam this coming November 20th.

In Mayan Death Robots, giant killer alien robots have come to earth to make a TV show, wake up the gods, and fight off Spanish conquistadors – ingredients guaranteed to deliver spectacular results every time. Players choose their robot and launch into vigorous one-on-one versus battles against friends in local multiplayer, or they can prove their worth battling the robot AI.

Coming over like a mescaline-fuelled future-past mech duel of gargantuan proportions, Mayan Death Robots gives the PvP turn-based artillery format a royal boot up the backside with no waiting for your opponent to pull their finger out – the action keeps rolling.

“Those Maya had some pretty wild stories, but this one’s true: our game is coming out this November, and in great shape,” said Karel Crombecq, lonely code shepherd at Sileni Studios. “I’m super proud of what me and Erwin have done with Mayan Death Robots, and so far a lot of other people say they like it too. Not long to go and we’ll know if they’re telling the truth too!”

After the game’s appearance by invitation at YouTube maestro Jesse Cox’s CoxCon in August, followed by a killer showing at Gamescom where it blasted the socks off a horde of media pros, Sileni Studios just couldn’t resist another outing. This time Mayan Death Robots will be in the hands of the great British public at EGX in Birmingham this September 24-27th on the Indie Megabooth. More information about EGX here: https://www.egx.net/egx

Find out more about the game and details on Steam.