Xtreme-LAb an indie developer based in Italy have today announced their first commercial project titled Somnium, a 2D side-scrolling shoot ’em up for PC and Mac where you play as a young solder hit by a weird grenade explosion and after regaining his consciousness, he finds himself in an odd fairy-like world, populated by talking animals and giant insects.

In this weird place, the game’s hero, named Jack, will meet the native Zurey, who will convince him to help her people stop the invasion of scary metallic creatures that are slowly taking the place of the peaceful animals of her world.

Somnium is scheduled to be released in summer 2013. 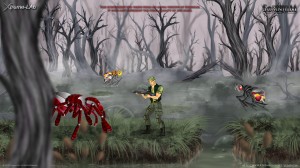