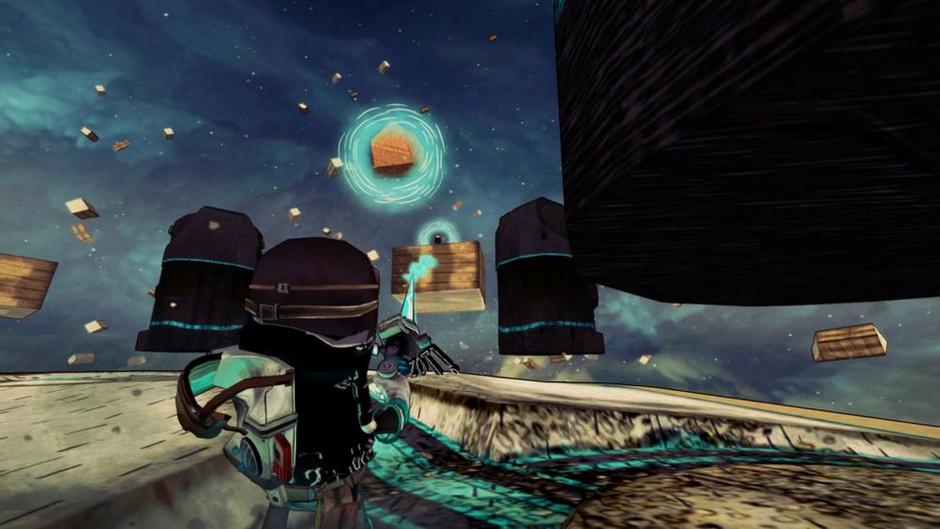 Black Pants Game Studio is a small indie developer which as you can easily guess by the name they prefer to create games with a sense of humor. Their first attempt in gaming is titled Tiny & Big: Grandpa’s Leftovers and it is which is a 3D puzzle/ platforming title with one of the funniest stories we’ve seen in a game in recent memory.

In Tiny & Big: Grandpa’s Leftovers you play as Tiny, a little, technophile guy with a ray cutter, a gripping device, a bad habit and a fine attitude towards the world. But now your nemesis Big stole the only heritage your grandpa left you: A fine pair of white, fine rib underpants!

The game, which was a 2011 IGF finalist and acknowledged at a few other award shows, combines 3D platforming with physics-based sandbox destruction, allowing players to slice and re-shape the landscape using tools including a long-range grappling hook and a high-powered laser.

“The idea behind Tiny & Big: Grandpa’s Leftovers it is that you have to use the environment… you can cut the environment and use the pieces in ways to complete the game either to complete puzzle, to get somewhere you couldn’t without those pieces lying freely around or to damage opponents in the game,” explained Johannes Spohr who helped create the game’s graphics engine in an interview.

According to Black Pants Game Studio “the whole development process of Tiny & Big: Grandpa’s Leftovers was a process of trial and error,” as they first they wanted to make a multiplayer game. Then a game about two persons but all these ideas turned out to be far too complicated for them so they flipped. They had one guy, Tiny, and another one is Big, who is much smaller than Tiny. After almost 3 years of development the first part of Tiny & Big’s of what according to the developer will be an ongoing saga, was released on 19 Jun 2012 . We, run, jumped, dragged, and sliced our way in the game and now we tell you what we thing.

In terms of looks Tiny & Big: Grandpa’s Leftovers could be easily described as an indie comic book as comic book elements like, drawn outlines, speech bubbles and the flat colors are all present. everyone is going to love all the SMURTLE”, “PSEEOW”, “POK”, “BAM”, “SPAK”word balloons and the detailed with black lines and stippling characters and environments created and the TnB’s art style, the brainchild of comicker Sebastian Stamm. What is bit annoying though is that the game repeats a lot of textures and parts of the environment. Soundwise Tiny & Big: Grandpa’s Leftovers is equally impressive as it is visually.The game has a 15+ song soundtrack composed entirely by small indie bands. The songs fit perfectly with the game, and they are so varied that you’ll never get tired of them. Throughout the game, you can collect these songs in the form of cassette tapes, and if you really like a song you can have it playing all over throughout the game. This superb music can also be purchased in a stand-alone form and we strongly encourage you to do so. Either way we feel that you should keep an eye on artists like 3Typen, THE Cromagnon Band , 3 Body Problem, and the other artists that contributed their beautiful music.