Capybara Games, an independent game studio based out of Toronto, Canada, have just announced that Critter Crunch, an award winning arcade-style puzzle game that was previously released on the App Store and the PSN, is now available for purchase on Steam.

Critter Crunch has players assuming the role of Biggs, a friendly, furry forest dweller with an unending hunger for tasty critters. Biggs uses his long, sticky tongue to grab critters from vines above, he feeds them to each other until they burst, dropping tasty jewels for him to gobble up. The game brings hand-animated characters and backgrounds, 4 Single-Player modes: Adventure, Puzzle, Challenge and Survival, and 2 Multiplayer Modes, Co-op and Versus.

Those interested can purchase Critter Crunch for the discounted price of 5,39€ until September 18th. 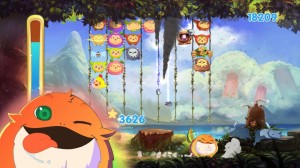