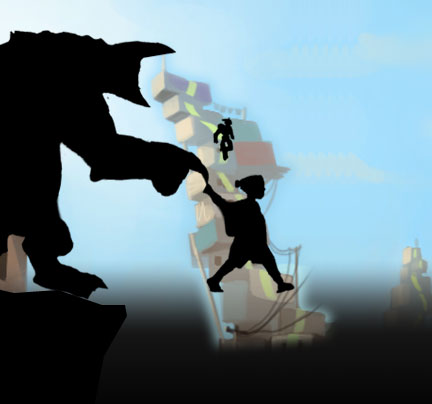 Montreal indie developer Minority announced today that their upcoming adventure puzzle game Papo & Yo will be released in North America on August 14, and one day later in Europe for $14.99, or a special price of $11.99 for PS+ members.

Papo & Yo follows the adventures of Quico, a boy who lives in the Favelas in South America, and his best friend and protector Monster, a large beast that loves Quico. Monster is addicted to eating poisonous frogs, and every time he does he turns into an angry, violent beast. It’s up to Quico to figure out how to harness Monster’s various abilities in order to find a cure for his addiction. Sony also revealed that Papo & Yo will debut alongside Sound Shapes, The Expendables 2 and Counter-Strike: Global Offensive as part of Sony’s PSN Play 2012 promotion, which means that if you buy any combination of those games, you’ll get some virtual bucks back to spend on PSN.