LEVEL-5, the Japanese game developer best known for the Professor Layton video game series, has today announced the release of their sci-fi shooter Liberation Maiden worldwide for iPhone, iPad, and iPod touch.The gane was directed by critically acclaimed developer Goichi Suda (SUDA51) from Grasshopper Manufacture, creators of fan-favorites Lollipop Chainsaw, No More Heroes, Shadows of the Damned and many more.

Liberation Maiden is set 100 years in the future in New Japan and puts players in the role of young President Shoko Ozora, piloting a humanoid mechshe must use to free her country from tyranny. 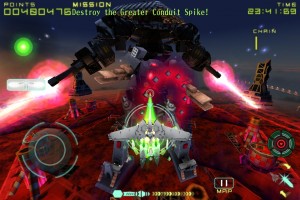 “We are excited to be bringing an amazing, high-quality game like Liberation Maiden  to iOS devices, providing a full-fledged handheld video game experience for mobile phone and tablet users,” said Akihiro Hino, President and CEO of LEVEL-5.  “Liberation Maiden  for iOS redefines what a mobile game can do with the quality design, story and gameplay normally only available to console gamers.”

Liberation Maiden features fully voiced English audio, and several exclusive iOS-only enhancements such as Game Center features and achievements. You can download it from here.