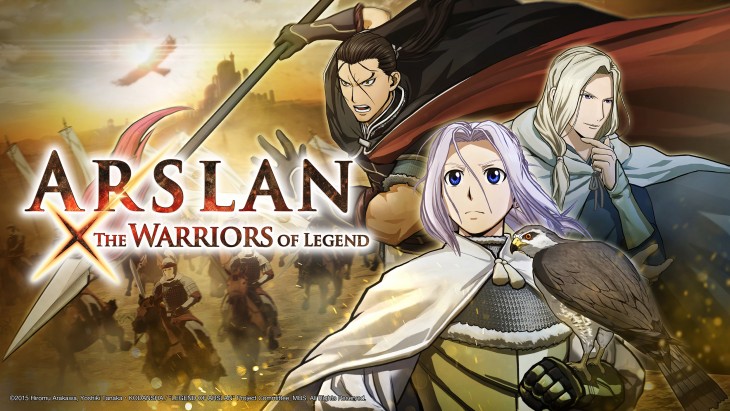 Koei Tecmo Europe revealed today a wealth of new information on the release of Arslan: the Warriors of Legend, which will become available across Europe on 12th February 2016 for the PlayStation 3 and 4 and Xbox One.

Based on the renowned novel, ‘The Heroic Legend of Arslan’, this tactical action epic is keeping close to the spirit of the rebooted anime and manga version illustrated by Hiromu Arakawa, creator of Fullmetal Alchemist. As such, in addition to the Warriors series’ traditional thrilling action of one versus thousand, Arslan: The Warriors of Legend incorporates a new type of action – the Mardan Rush. Designed to match the setting of ‘The Heroic Legend of Arslan’, this action allows players to wipe out large numbers of enemies by taking control of special ‘Rush’ units (mounted, ranged, or melee) and dealing devastating damage.

In addition to controlling army units, the game also features new battle moves for individual characters, like the Chain Strike. As the story progresses, playable characters will gain access to different weapon types. Chain Strike allows for a real time switch between available weapons while executing a power attack, which brings more variety to the action and can be used to prolong combos!

Furthermore, Koei Tecmo announced a series of exclusive bonus content, available to those who pre-order Arslan: The Warriors of Legend. Specifically, pre-orders through independent retailers, via CentreSoft, will include a special weapon and armour set for Daryun, Arslan’s most trusted guardian. Pre-orders through GAME will come with ‘Conflict at Gujarat Fortress’, a new original scenario for Free Mode. Lastly, those who pre-order via ShopTo.net or the PlayStation Network will receive ‘Battle for the Title’; a new original scenario for Free Mode. Both scenarios offer players the possibility to unlock some very special Limited Skill Cards, which will give them an extra edge in battle!

In support of the information released, Koei Tecmo has put together a generous batch of new assets, including two newly unveiled playable characters (Jaswant- a former spy for the kingdom of Shindra- and Kubart- a seasoned veteran of the Pars cavalry), images from two additional stages (the fortress of Kashan, and the citadel of Peshawar), screens showing the Mardan Rush and Chain Strike in action, as well as assets showing off the pre-order bonus content!

Finally, Koei Tecmo Europe is pleased to announce that a first playable demo for Arslan: The Warriors of Legend will be available to visitors of the MCM London ComicCon between the 23d and 25th October in London!