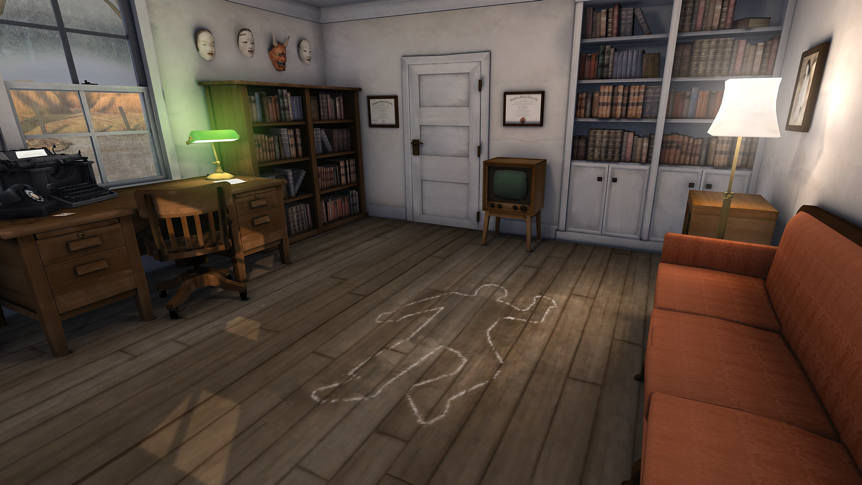 After a decade of rigorously studying horror and mystery game design, independent studio Robot Invader is excited to announce the release of its first game in the genre: Dead Secret. Designed specifically for VR yet firmly connected to its console roots, the game will launch in January on Steam, PS4, and PS3 and later in 2016 on Oculus Rift and Playstation VR. It is available today for purchase on Gear VR for $9.99.

Who murdered Harris Bullard? A reclusive man with a mysterious past, Bullard was found dead in his study five days ago. Nobody suspects foul play, least of all the police. But you know better: this is murder, and it’s up to you to prove it.

Designed for console and VR, Dead Secret is a mystery thriller in which you play as an ambitious journalist on a mission to make headlines. To get the story you’ll have to comb the crime scene for clues and decipher the mystery of Bullard’s twisted past. Uncover secret documents, explore the dead man’s home, and piece together the puzzle to name the killer. But keep your wits about you: Bullard took his secrets to the grave, and somebody wants them to stay there.

“We’ve been thinking and writing about scary game design for over a decade, and we’re thrilled to now be shipping our first game in the genre ,” Robot Invader Co-Founder Chris Pruett said. “Dead Secret is focused on mystery, but we made sure that there’s a hefty dose of dread in there too.” The game is deeply influenced by titles such as Clock Tower, Siren, and Deadly Premonition. Pruett describes the game as “something of a love letter” to classic horror and mystery games. “Anybody can play and enjoy Dead Secret, but I hope that fans of the genre will be particularly delighted.”

Robot Invader is a small independent studio located in the heart of Silicon Valley. Founded in 2011, the team is best known for Wind-up Knight, a challenging platformer played by more than ten million people worldwide. Other notable titles include Rise of the Blobs and Wind-up Knight 2.