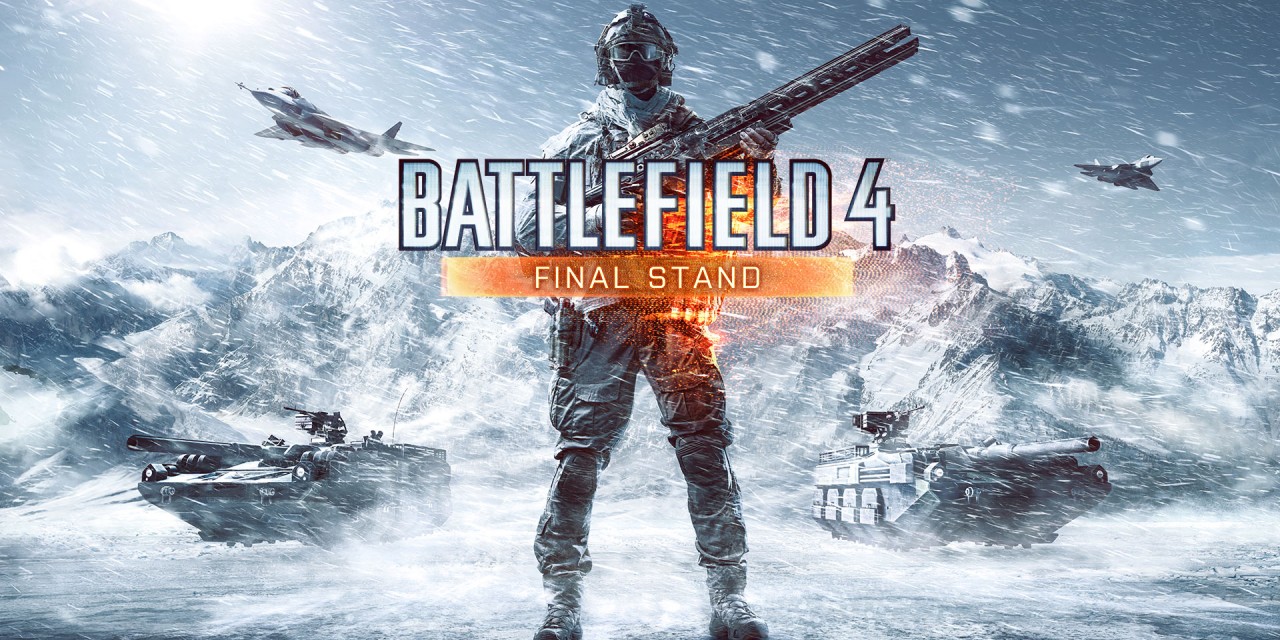 Battlefield 4 Final Stand will be released to Battlefield 4 Premium members today on all platforms, including a whole bunch of updates and fixes for the game on all platforms. Watch the new hovertank, snowmobile, rail gun, remote operated high-speed flying drone, new levolution moments and more in action.

The battle in Final Stand reaches its epic conclusion on four all-new maps set on the wintry Russian landscapes. On Giants of Karelia, Hammerhead, Hangar 21, and Operation Whiteout you’ll fight both the opposing team as well as the sub-zero temperatures and harsh blizzards. Taking cover inside, you’ll find secret installations with military prototypes reminiscent of those in Battlefield 2142.

Get ready for the full list of changes in this update:

GENERAL
• This game update enables the Battlefield 4 Final Stand expansion pack.
• Tweaked the hit indicator speed to behave more like Battlefield 3.
• Fixed an issue where the hit indicator size for shooting an enemy player in the arms would be small, when it actually should be medium size.
• Added advanced gameplay options for customizing the hit indicator.
• Tweaked hit indicators: medium hit texture to better fit with small hit and headshot textures.
• Improved the hit indicator accuracy from vehicles when shooting enemy infantry.
• Made it clear in the in-game squad menu that a “Squad Join”-squad is not a private squad.
• Fixed an issue that prevented players from joining a rented server that was protected with a password.
• Added an option (under the advanced gameplay options menu) to toggle the Defensive Perk icon on spotted enemies and set it to be OFF by default now. This icon was originally added in the Fall Patch (September) and set to be always ON at the time.
• Added fix for a water splash effect on players who were shot at after emerging from a dive. This usually occurred after the second time the player emerged.
• Fixed several issues with the underwater audio mixer for players who were diving and emerging several times in a row.
• Fixed the Battle Pickup respawn so that it will only respawn after its ammo has been depleted or the player carrying the Battle Pickup has been eliminated.
• Adjusted the terrain loading on China Rising maps to improve terrain during the start of the round.
• Fixed a case where in-game Battlelog would not show after signing out of a profile while on the rent a server store area.
• Fixed an issue where the TV missile HUD would be flickering on and off.
• Fixed an issue that would sometimes cause a graphical corruption at the bottom of the screen when flying a helicopter over water.
• Fixed a typo in the description of “Damaged Type Based Shape”-option in the gameplay options menu. “Hint” has been correctly changed to “hit”.
• Capture the Flag: Fixed duplicate flags being rendered when the flag is taken the instant it returns to the base.
• Capture the Flag: Fixed an issue where sometimes the flag would be rendering at an incorrect place, instead of on the player who is holding it.
• Fixed an issue where soldier weapon flashlights and lasers would render on vehicle-mounted weapons.
• Cleaned up the reticle icons and thickened the lines to make them read more clearly.
• Changed friendly fire to be OFF in the “Classic” rent a server options preset.
• Updated the new advanced HUD option descriptions where “Friendly” was sometimes incorrectly referenced to as “Enemy”.
• Fixed an issue where knifing a player with the “4th Floor” dog tag would display a blank dog tag.
• Updated the holo sight shader to better render against bright backgrounds like snow.
• Updated vehicle HUD colors and shaders to be more visible vs bright backgrounds.
• Fixed an instance where the HUD for the RAWR would get extremely blurry and fuzzy when looking at certain surfaces.
• Fixed an issue that could cause Battle Pickups to sometimes sink into the ground when dropped. Players should now be able to pick them up without any problems.
• Fixed an issue where players who left vehicles could kill teammates or themselves by launching the vehicle at them and exiting it. Player can still kill enemies this way and is now correctly awarded points if killing them.
• Fixed an issue with the M18 Smoke functionality, where the smoke would only be visible for the players who stayed on top of the grenade.
• Fixed an issue with the Desert Eagle muzzle flash.
• Added extra smoke emitters to both M320 and M18 to decrease the smoke spawn time.
• Tweaked the XM25 Airburst smoke.
• Fixed cameras that were not correctly pointing at the flags. This change affects Commander Mode in Conquest Large on the Sunken Dragon map.
• Updated Medic bag so that it does not heal soldiers who are suppressed or underwater

Operation Locker
• Fixed an instance where players would see a floating cardboard box, after destroying the boxes below it.
Hainan Resort
• Fixed a small step that the player is forced to jump over west of the Resort, at the small building next to the empty pool.
Dawnbreaker
• Rush: Fixed an invisible collision north from the bus station that stopped projectiles and bullets.

• Fixed occluder issue present after destroying a wall on the north side of the building situated at the D point.
• Fixed an issue with an invisible wall on the corner of the Statue, south of flag D.

• Corrected errors in zeroing/velocity for L96, 338 Recon, and SR338. All had zeroing/muzzle velocity problems. All these weapons now zero correctly.
• Using a FLIR/IRNV scope no longer cancels out the blinding effects of a Flashbang.
• Corrected the description text of an advanced aim sensitivity option to mention 3X scopes (like the ones for .44 Magnum and M1911 pistols)
• Fixed a bug where you would sometimes lose the effect of the FLIR/IRNV after spawning in.

PC
• Added a fix that allows plug-n-play controllers to be recognized even if they are connected after the game has been launched.
• Added the ability to reposition the network performance overlay graph.

PlayStation 3
• Fixed an issue in single player where the PLD gadget didn’t properly highlight enemies.
• To improve the performance on Lancang Dam in the Obliteration game mode, we removed the attack boats and jets.

PlayStation 4
• Fixed an issue where the parachute camouflage would switch back to default if the player quits the game via the “Close Application” option in the PSN Menu.
• Fixed an issue in single player where the PLD gadget didn’t properly highlight enemies.

Xbox One
• Fixed an issue where the class loadout would not save if the player quits the server while in game or at the end of round screen.
• Fixed an issue where a player is not taken into a session after accepting an invite while the server browser is accessed from the Squad Join menu.
• Fixed a crash that could occur when signing out from the lead profile while playing multiplayer.
• Updated displayed pricing for EA Access users.

SERVER R34 FIX RELEASED IN OCTOBER
• On rented servers, admins are now able to edit the amount of players needed to start a game.