Beeline Interactive, a leading developer and publisher of social smartphone games, and Sony Pictures Consumer Products today announced that their new “Ghostbusters” App for iPad, iPhone and iPod touch is now available for free on the App Store.

Based on the beloved Ghostbusters film series, the game lets players build their own team of Ghostbusters from the ground up and try to stop troublemaking spirits all over to New York City. Players will earn rewards as they successfully slime their way through barriers and trap harassing haunts, which they can store in their containment units for later experimentation.  Back at headquarters, players can conduct research to upgrade their equipment and improve their chances of victory. 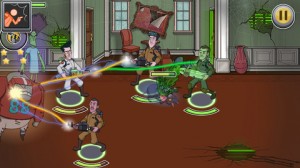