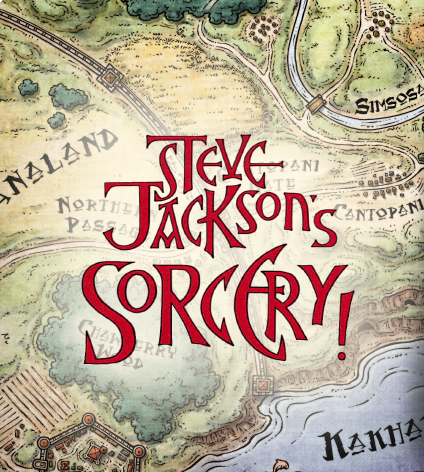 inkle, an independent developer of interactive narrative apps, have announced that they are developing an iPhone / iPad adaptation of Steve Jackson’s Fighting Fantasy gamebook series Sorcery!. As stated by inkle the game will be an “adventure that writes itself around players’ choices”.

“We wanted to make something that brought the strange and wonderful world of Sorcery! to life, so we created a game that’s always in flux. There are scores of locations to explore, and thousands of choices to make, and everything you do has the potential to change what happens next, right down to the words of the text. Even the combat sequences are written on the fly as you play,” says Jon Ingold, inkle’s creative director. “Sorcery! was a gamebook when we started, but now it’s something entirely new. I don’t think anyone’s ever made a game like this before.” The new game plays out across a hand-drawn 3D map, with the player choosing their own route as they explore a massively “branchy” storyline. Sorcery! features a sword-fighting system designed for touch devices, an arsenal of almost 50 different magical spells, and gameplay that requires decision-making and strategy at every turn.

“Sorcery! was by far the most ambitious Fighting Fantasy adventure I ever wrote. At the time, I got completely carried away in my ambition for the series,” says author Steve Jackson. “Playing through this iOS version, it’s obvious that inkle have been equally ambitious — perhaps even more so. What they have created is nothing short of a whole new genre of interactive fiction. And I applaud them for it.”

Sorcery! will launch on the App Store this May.