In Mark of the Ninja you control an almost silent hero who belongs in a special tribe where the high regarded warriors are marked with a special tatoo made of the ink of a very rare desert flower that gives the ninjas special abilities but also drives them slowly to madness. Soon we see this special tribe being attacked and our hero chasing these intruders, this is in short the game’s story.The truth is however that even if the story was absent  none would notice it as the gameplay manages to suck you into Mark of the Ninja’s world. 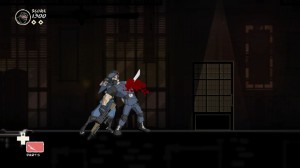 In terms of gameplay Mark of the Ninja is basically a stealth oriented 2D platforming. Our hero must sneak through a series of environments while staying out of sight of guards and performing silent takedowns. In every level there are basically 3 ways to enter an area and perform your takedowns. From the top, the center or the bottom with each approach resulting in alternative challenges. Levels are divided into areas of light and darkness; the player character is invisible while in the latter. Sounds such as running are represented visually by a rapidly expanding circle. 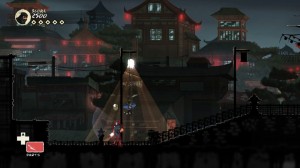 What is rare for a platformer is that Mark of the Ninja features a sight mechanic, which means that enemies which are invisible to your hero are also invisible to the you, however their sounds are represented on-screen in the same manner as the player character’s. By approaching enemies undetected, the player character can execute a one-hit kill. To accomplish this, they can extinguish light sources, hide behind objects and pass through narrow grates and shafts inaccessible to enemies. If you are detected your enemies will sound an alarm  that will alert all enemies in the area. If they hear a sound or get a glimpse of the player character they become suspicious, displaying a question mark over their head and actively searching for the player character 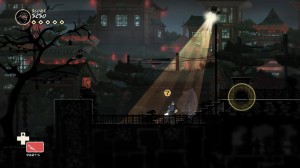 What you should do in that case is to remain out of sight for a set period, and enemies will return to their original positions and one-hit executions will once more be possible. Things can get messy very easily however but thankfully the game’s checkpoint system is here to avoid let downs after many failures. Getting detected and killed will not affect your end score and will just reload you at the previous checkpoint, allowing you to try different things and aim for a perfect score without having to restart the level countless times. 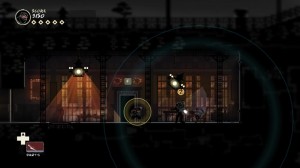 At the end of each level you receive points for executing silent kills, passing by enemies without being detected and achieving optional goals such as recovering artifacts and a series of haiku which tell the history of the ninja clan. You loose however points when an alert is sounded by enemy guards. Depending on your performance you also earn seals that are used to buy or upgrade skills and weapons and also alternate costumes. You can spend your seals in three sections: techniques (passive skills and more types of stealth kills), distraction items (such as smoke bombs and firecrackers) and attack items (such as spike mines and caltrops). The next screen allows you to select any unlocked costume and equip items. 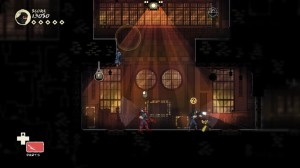 To gain these seals you must reach a certain score on each stage, collect the secret scrolls, and complete the special objectives present in each stage. Some of the scrolls are obtained through secret challenges, where the player is transported to a room to solve a puzzle. It’s a great score attack game and, with no time limit pressuring you, you are free to take your time. 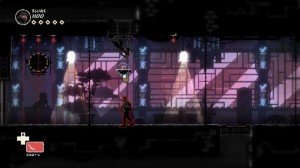 By the end of the game you will find yourself having a wide array of abilities and weapons to choose from.  You can freeze action mid-air and fire darts to destroy lights and fuse boxes, you can dump guards bodies into skips, into vents or off ledges etc. You can use spike mines, smoke bombs, and caltrops to aid you, and you can buy loads of abilities and upgrades for your moves list and equipment. there is a lot here for your money. This further expands the number of ways you can approach the game’s different missions. 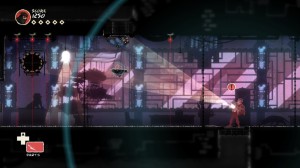 Keyboard and mouse controls might take a while to get used to but as soon as you master them than you will be surprised on how unfailingly right they feel. There are many times that you’ll have to move extremely quick, and 9 out of 10 you will accomplish it. However using a controller is definitely going to yield to a much better playing experience.  The good thing with Mark of the Ninja is that you are not totally done with it once you finish it. There is the New Game+  you can try which allows you to carry all the special abilities you gained right from the start making you feel you are playing a whole different game as you can now take numerous approaches to taking down enemies which are also tougher enemies while  getting spotted becomes a lot easier.

What makes Mark of the Ninja one of the best stealth games in recent memory is that it manages to deliver an authentic stealth experience where hiding away from your enemies is not an option, but a definition for the gameplay, making the silent passing from your enemies  even more exciting from stabbing them. 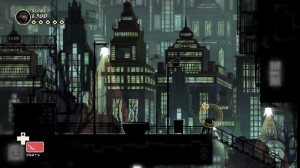 You are able to go through levels without killing anyone (very difficult though) and this is where the replayability comes in as each stage is rated and you will constantly come back to them to try to better your score, or just try the level in different ways. Klei’s title is platformer-stealth winking to puzzle-games, with an enviable replay value, an accessible but yet honest gameplay and a beautiful level design, which transforms Mark of the Ninja in a non-linear and unpredictable experience. 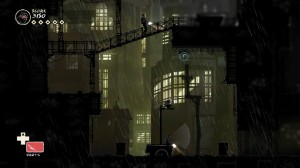 It is  definitely one of the coolest games we have played in quite a while. Klei have already proved that they’re masters of side-scrolling beat-em-ups with Shank and Shank 2, we feel however that Mark of the Ninja is their  best effort to date, dark, challenging, and brilliant, totally worth getting at its 14,99€ price tag. Even if you’re normally not into stealth games, Mark of the Ninja is definetely worth your time.