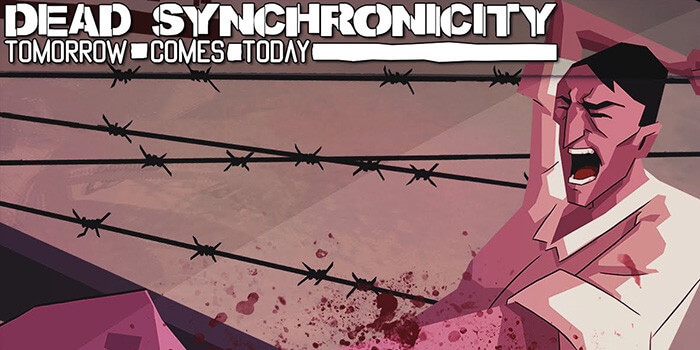 The soundtrack, created by members of the indie rock group Kovalski, is influenced by orchestral rock of the 70’s and Italian giallo soundtracks, and is intensely linked to the game’s plot and art. The art style is a distinctive 2D style that fits the game’s mood. Characters are geometric, hard, angular and loosely inspired by expressionism. Locations have a rusty look that corresponds with the desolate society “the Great Wave” has left behind, both physically and morally.

Dead Synchronicity: Tomorrow Comes Today tells the story of Michael, a man with no past, who must recover his identity and decode the two events that brought the world to the edge of collapse. The first one is the so-called “Great Wave,” an inexplicable chain of natural disasters. The second is a pandemic that has turned humans into “the Dissolved,” infected beings with special cognitive powers whose sick bodies will eventually dissolve into blood. If Michael doesn’t hurry, he won’t be able to avoid the impending moment of “dead synchronicity” when Time itself starts to dissolve.

Players will find space-time distortions, concentration camps, supernatural phenomena, gruesome deaths, hard-to-solve puzzles and, all in all, a bloodstained challenge!