Bethesda Softworks announced this morning that The Elder Scrolls V: Skyrim Legendary Edition, which includes all the game’s downloadable content, will launch for PC, Xbox 360 and PS3 on June 4 and 7 in North America and Europe, respectively.

The bundle includes the original game, official expansions Dawnguard, Hearthfire, and Dragonborn, as well as “added features like combat cameras, mounted combat, Legendary difficulty mode for hardcore players, and Legendary skills – enabling you to master every perk and level up your skills infinitely.” 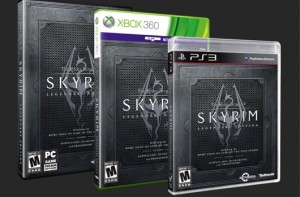