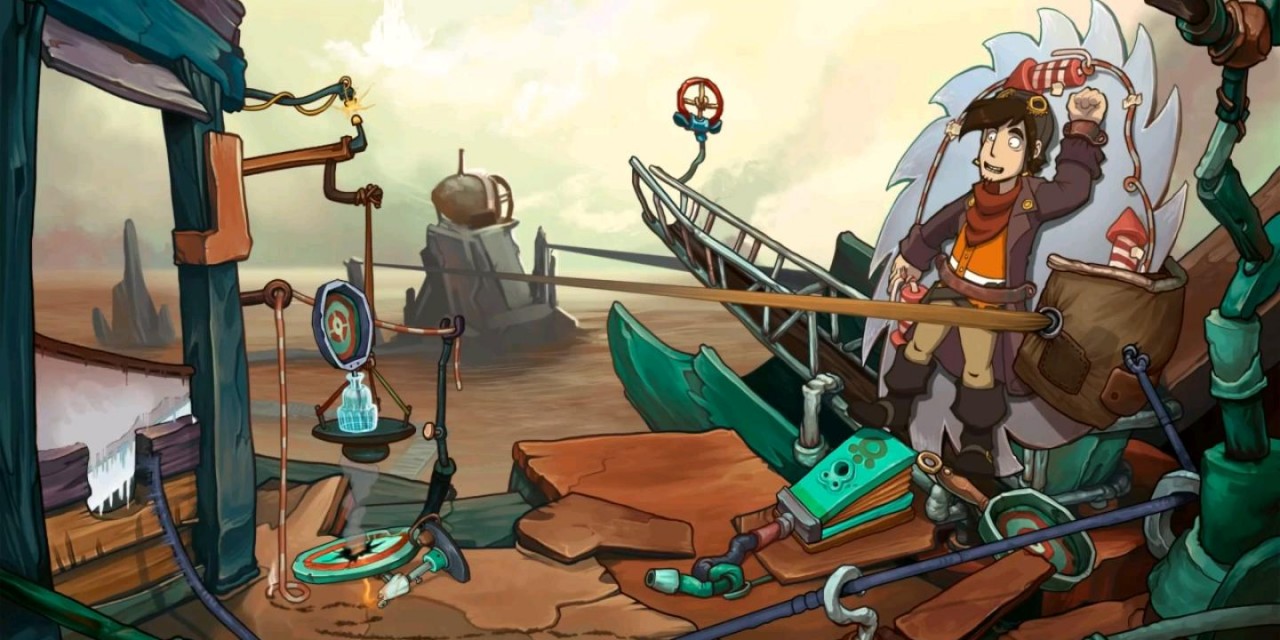 After the events on Deponia, Rufus has finally realized that he needs to change. He is more grown up and wants to stop causing all sorts of chaos for himself and those around him. In this second part a flaming saw blade lands Goal on Deponia again and now she is a bit different. The landing was so rough that it split her personality drives into three discs, Spunky Goal, Baby Goal and Lady Goal. Rufus must now convince all versions of Goal to become one again and also attempt to make his way to Elysium and stop the Argonons from destroying the junk planet of Deponia. We have to admit that this time around the story is better delivered than the first part, while the superb humour not only is retained but also redefined, making Chaos ane of the few games, that are much better in their second part compared to the first attempt. We are treated to an array of new places to explore, and meet lots of new characters – as well as a few familiar ones – who will both help and hijack your plans. There are some really funny new people and the game does have more genuinely funny moments and witty remarks than the original game. One of the really nice things about Chaos on Deponia is despite the story being a sequel, it is a standalone game and you do not have to play the first game to understand the events of the second. The gameplay hasn’t changed at all and Deponia remains a well delivered point and click adventure. With your mouse you’ll navigate the environment, examine objects, interact with other characters, and of course solve the tones of puzzles you’ll meet on your way. Chaos however is not for the novice adventurer, since there are always so many locations, people, and items to factor into a puzzle. What caused some problems in gamers in the first Deponia was that some puzzles had the craziest solution you could imagine, something you would expect with such a weird come,but at times felt too much to handle. There are a lot of inventory-based puzzles, combining several items to make a new one, for example. More so than in the first game, you will have conversation tree puzzles, where Rufus needs to select certain speech responses in order to solve a puzzle or to convince a character of something. There are also some maze-like puzzles and even a chess-based one. This time around when you get stuck in a puzzle Rufus is here gives you a slight hint, in order to help you uncover some of the madness that is going around you. If you  are the kind of gamer that gets frustrated you can bypass a puzzle and return to it whenever you feel more relaxed. If you do this more than often however then this backtracking might tire you as little. Deponia may had an abrupt ending that left many gamers just site in front of their computer and wonder what was that just happened, but thankfully Chaos has a smooth end until that reveals a  pretty good twist as these things go. In terms of re-playability chances are that you won’t play the game more than once though, as the game is very linear and players will want to wait for the third title to conclude the story, rather than play this one again, but that isn’t a bad thing, as it creates anticipation for the third chapter and does its job as part of a downloadable series.

As we already said Chaos on Deponia is one of those rare cases where the second coming is better than the original. Choas has now a bigger, richer and more beautiful world to explore, more ace characters and that top-notch sense of humor. Players who enjoyed the first title will be pleasantly surprised as things get even better here. Deadlalic brought us a story that can suck the player into the game’s world and leave him with only  wishing that Daedalic brought the third part the soonest possible. If you like Point/Click Adventure titles, Chaos on Deponia is definitely the game to get.  If you play too many FPS titles or action games, you may not enjoy the game as much.

Chaos on Deponia can be downloaded via Steam and Rain Digital Games.