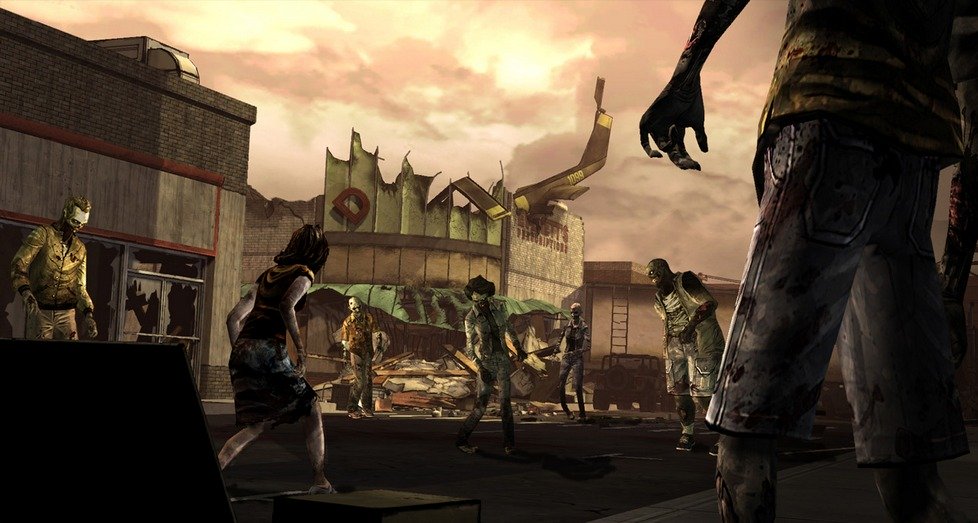 In the game you take control of Lee Everett, a History teacher at Georgia University arrested for allegedly killing a state senator sleeping with his wife. In the beginning of the game Lee is held at a police car’s back seat, but after a car accident outside of Atlanta Mr Everett finds himself alone while hundreds of zombies have taken over the area. After narrowly escaping and killing numerous walkers the first character he meets is a little girl called Clementine who in this madness tries to find here parents and lies all her hopes in the professor. Soon many other characters will appear, while other will unfortunately won’t manage to escape the Walker’s mania. This is basically the synopsis of the first episode in the game. Starved For Help the second episode begun three months after the conclusion of the first episode. In this episode food is gone. The electricity is gone. The tensions in the group are rising, and there is no end in sight. The third episode is set a week after the events of “Starved for Help”, and sees the survivors continue to use the Travelier Motel for shelter, but now they have obtained more supplies from the back of an abandoned car. Once again however, supplies are running low, and the town of Macon has been almost picked clean, leaving everyone to argue about the future of the motel. The Walking Dead is a cross-genre of both adventure and action with some role-playing elements and unlike typical zombie games such as Left 4 Dead, it gives focus more on characterization and emotion than action. Adventure elements in the game come in the shape of collecting objects and combining them, or using them against the life threatening walkers. There are a few puzzles to solve in Episode 3 , but like in previous games, they are not very difficult. There are a limited number of things you can truly interact with, so figuring out what you need and where to use it isn’t hard at all. The most interesting feature in The Walking Dead is the dialogue system this game adopts. From the very first moments in the game you’ll have to thoroughly think what to answer in each conversation as the characters remember your answers not only throughout the game, but throughout the entire five-episode adventure and they will use what you said to them either in favor or against you. Unlike Telltale’s titles like Back to the Future where you could double back in conversation trees and explore all the options, The Walking Dead removes that. Whatever you decide, you live with. However don’t expect a whole different story to unfold when you replay the game and change most of your answers. What will eventually happen is that you’ll the exact same outcome for some, but not all. What gives a boost in the game’s realism and adds re-playability value is that a number of times you have to option to deal with life-or-death situations that will lead you in the dilemma which of the two characters that are being attacked by the walkers you must save. In one more episode the characters are so realistic impressing you with the dark secrets they hide, their instability and the cold blood they show in taking decisions. There will be times in the game where you’ll find yourself wondering is what just happened in the game was actually true, and if the game’s designers are so twisted forcing you to take decisions against your moral values. Especially in Episode 3 you’ll end up making some of the toughest choices you’ve had to stomach so far, including a number of life and death situations for a good portion of the cast. Visual glitches and frame rate problems continue to spoil the great art direction, that, but are far improved compared to the first two episodes and are not enough to stop you from being carried away by the fantastic narrative.

After a great TV adoption of a great comic book adventure it is safe to say that the game version of The Walking Dead is a small triumph for Telltale which took everything fans love about the comic books and television show and created a game with authentic emotional impact. The graphics, a wonderful homage to Charlie Adlard’s work, the game’s story and unique gameplay where every single decision counts, will make you agonizing over the choices you made and how will they will affect future episodes. Telltale continues to do with episode 3 to have you counting the days until the next episode comes out. The walking Dead is all about creating the right atmosphere. This is not a game for Players who were expecting an FPS where you slice as many zombies as you can with a katana should look elsewhere. This isn’t Left 4 Dead, this is a game about the actual survival aspect of a zombie survival game. This third episode especially was pure video game brilliance. The characters act so natural that they manage to create you a weird felling of proper emotion for people you know are fictional.

This third episode of The Walking Dead retails for 400 Microsoft Points on the Xbox LIVE Marketplace, for $4.99 on the PlayStation Network for and is also available on PC and Mac as a season pass for $24.99 from the Telltale Online Store and other digital outlets.