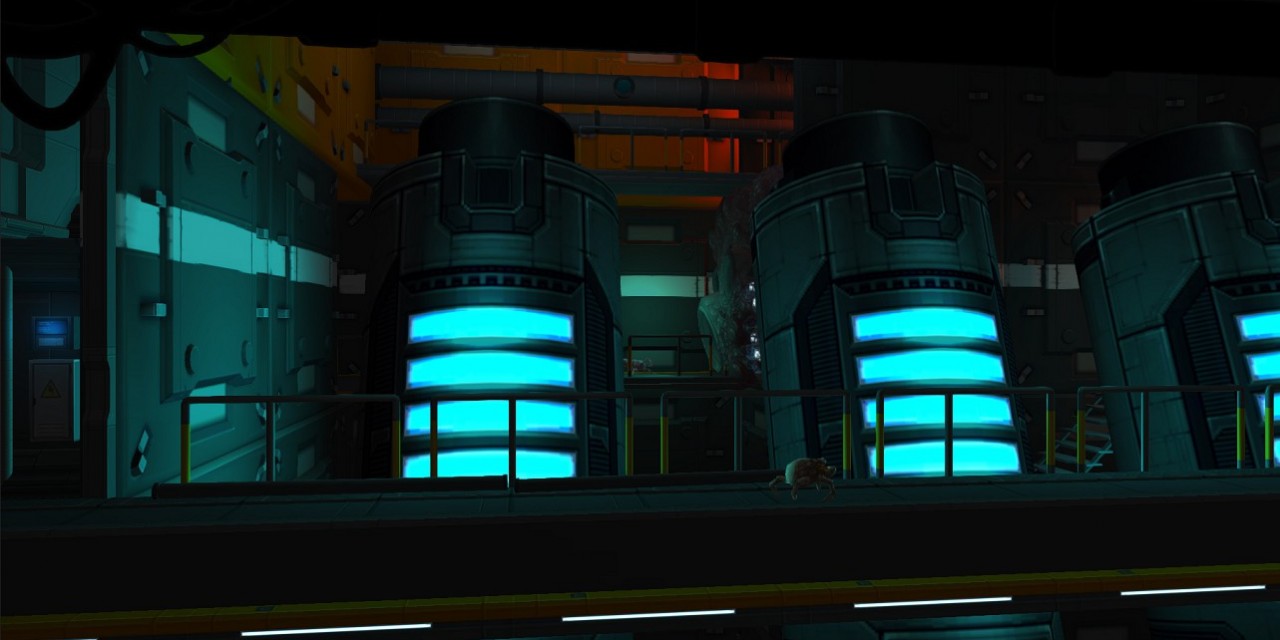 Tell us a little about your game development experience, and what led you to form Interwave?

We wanted to make games! InterWave started as a group of friends playing Source games on the old Steamfriends game servers. Playing lead to chatting, chatting lead to fantasizing about making our own games, and fantasizing lead to the dark side… I mean to eventually making our own mods and games. Our first Half Life 2 mod was Stargate: The Last Stand.

How it feels going from Nuclear Dawn to Dark Matter?

It’s a shock – Nuclear Dawn was a hugely ambitious title that strained both our sanity and resources. Dark Matter is a much more focused title, though we still somehow managed to make it hugely ambitious. 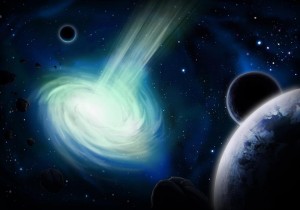 Why the title Dark Matter?

There’s a list of reasons why we stuck with the name. Dark matter is an actual space thing, and the game’s story offers one possible (pulpy and sci-fi) explanation for the origin of dark matter. One of Dark Matter’s core mechanics is the interaction of light and darkness, so the title fit that aspect as well, and then there’s the somber tone and tales that fill the game world.

We didn’t actually intend Dark Matter to stick, in fact it was just the project label, and I believe our tracker still says ‘Project Dark Matter’. However, as development progressed, the name fit more and more, and now it’s as much part of the game as all those slimy aliens. 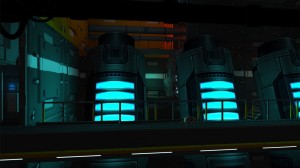 If someone walked up to Dark Matter for first time, how would you describe it to them?

It’s a platformer for when you grow up, and have less patience with pixel-perfect jumping puzzles. It’s a paced adventure for when you crave a good story and hard combat. Also, there are gross aliens in it. 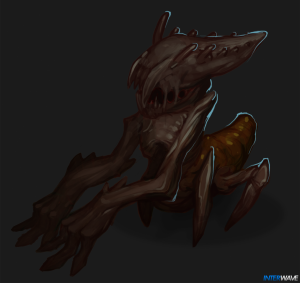 You cited, Metroid and Castlevania, Resident Evil and Silent Hil as influences. In what ways would you want Dark Matter to be similar to each of those games? Do you have some specific points of similarity in mind?

Dark Matter is a side scrolling platformer with a lot of exploration, branching upgrade paths and levels that open up as you acquire new equipment. There is a lot of motivation to go back and revisit old locations so that you may unlock more and more resources and blueprints. In that respect, it’s a straight up Metroidvania game.

But then there’s this other side of the game. You’re alone, and vulnerable against an overwhelming force. Unless you have the reflexes of a supreme gaming god, walking into a room lights blazing will just get you killed. In Dark Matter, you are low on resources and health, your enemies are very powerful and even the simplest critter can kill you with ease, if you let them catch you unaware.

You must carefully decide whether to craft yourself ammo, or health, or weapon upgrades, and once you commit resources to one of those, you won’t be able to go back on your decisions easily.

In that second respect, the game is a lot like Silent Hill and Resident Evil, where there is a lot of action, and a lot of exploration, but the sense of impending doom never quite leaves you, because you can’t be quite sure what’s coming out of the shadows next. With the way the levels and AI are constructed, that’s something not even we are certain of. 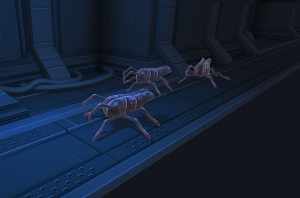 What are the inspirations behind Dark Matter’s art style and story? Are there influences or mechanics that you used in Nuclear Dawn present in your latest effort?

Dark Matter was inspired by the atmosphere of the very first Alien movie, with its tense atmosphere, the deadly alien creature you knew nothing about at the time, and a survivor struggling for her life. Good stuff.

The backstory has very definite shades of Hamilton and Chandler – but is quite original beyond that, and was tailored specifically to the game. We made sure there’s plenty of room for future expansions and games in the series, should Dark Matter prove to be popular.

Funnily enough, while the game will be fully playable with a joypad, we are currently calibrating the primary control scheme so that the game will be instantly familiar and to FPS gamers. We think it’s high time PC gamers get some first-class love from a game like Dark Matter. 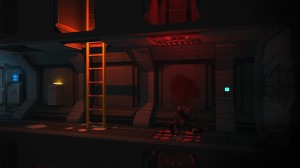 What is the biggest challenge you have faced with Dark Matter so far?

We had made several assumptions about how easy certain parts of the tech would be to implement. They turned out to be, of course, colossally, embarrassingly wrong. Even the most advanced engines on the market have very tailored light solutions, and if you want anything as specific as Dark Matter’s requirements, you end up making it up from scratch.

On a gameplay side, we’re breaking new ground with the combat in Dark Matter, and that’s always a little scary because when there are no examples of how it’s done, you have to figure everything out from basic principles, and it’s a daunting task. 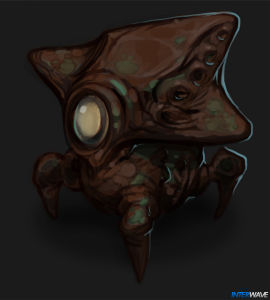 The game’s description says that Dark Matter features complex enemy AI that reacts to the player’s actions and tactics, rewards thinking about what you’re going to use against which enemy, while light and darkness are integral parts of the gameplay. Could you share some examples with us?

Most of the action plays out on a derelict spaceship. Lights are off, systems are damaged, not much works. You’re there with your flashlight, trying to make your way. The player relies on the flashlight to navigate the environments, or at least reach a light switch.

The parasites that took the ship over evolved in deep space, and react to light as a threat. The player’s flashlight, or any lights the player turns on, will enrage the scavenger aliens. This has several effects, based on the alien itself. Blisters will ‘activate’ and explode in your face. Eggs will spawn poison, or enemies. Tunnel entrances will spawn more enemies. Some aliens will attack madly, with renewed vigour, some will rally every single enemy in the room, and others yet will flee to get help.

Light is what drives a lot of the game’s emergent combat, and the player’s use of the flashlight will determine how stealthy or action-packed gameplay is. A lot of the game’s puzzles and challenges are based on learning how to manage your flashlight, and when it’s safe to try and feel your way around in darkness… even when you’re armed to the teeth.

What drew you to Steam Greenlight?

We weren’t so much drawn to Greenlight, as thrust into its arms by Valve. As a system it’s in evolution and we have no doubt that it will keep improving over time. Since we’re planning to use Steam as our primary distribution platform for beta and press keys, we thought we’d get an early start on Greenlight, and get Dark Matter out there well on time for the beta! 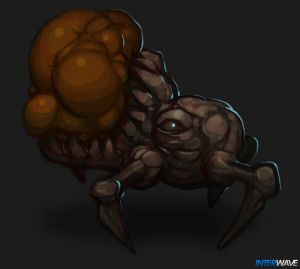 What are your expectations for Dark Matter?

We’re quite excited about the innovations, slight as some may be, that Dark Matter brings to the Metroidvania genre, and we’re hoping that they resonate with gamers as much as they did with us in the design phase. Dark Matter’s a bit of a wishlist of what we always wanted in our Metroid games, so it’s a pure love project from a certain perspective. 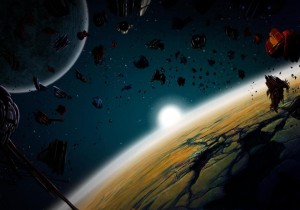 What have you been playing lately (indie or otherwise) that you’ve found to be particularly great or inspiring?

FTL, XCOM, Torchlight II and Dishonored in terms of new releases – they are all great titles, and each should be played on its own merit. FTL because it will make you cry like a little girl every time your crew dies, the others because of their near flawless execution and superhuman polish.

Any idea when folks will be able to get their hands on Dark Matter?

Plenty of ideas, little fact! Our internal schedule says we’ll have a Beta in three months, and then we should be ready for release three months from that, but if there’s one thing that Nuclear Dawn taught us is that Valve Time is everywhere, in every aspect of game making!

You can give your positive vote for Dark Matter over here. If you want to lean more about the game you can find more info at www.darkmatterthegame.com and https://www.facebook.com/darkmattergame.