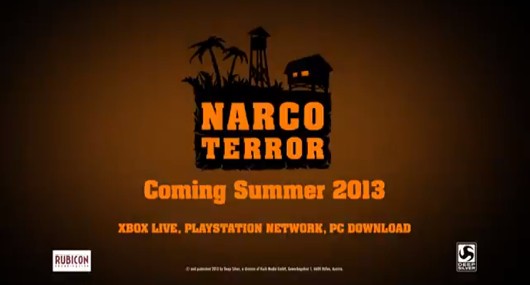 Deep Silver and Rubicon Organization have unveiled Narco Terror a sophisticated, action-packed twin-stick shooter inspired by the classic action movies from the 80’s.

In Narco Terror you play as ex-special ops Rick Quinn, a one-man-army whose beloved daughter has been kidnapped by Delgado, a drug cartel leader owner of a new tool that could expose the secret narcotics smuggling ring. Quinn is the deadliest weapon around, and will stop at nothing to get his daughter back.

Narco Terror will feature an arsenal of customizable weapons, different ammo types from explosive rounds to tesla coils, grenades, power-ups, upgrades and character progression. Quinn also has a love for heavy machinery, and will be piloting helicopters and aircraft, battling through enemy lines consisting of massive tanks, armed helicopters and fast planes.

Up to two players can play Narco Terror in both local and online co-op, with seamless drop in and drop out at any time. Narco Terror will be available this summer, via digital download, for PC, Xbox 360 and PS3.