Deep Silver announced today the details of Saints Row IV Collector’s Edition: the Super Dangerous Wub Wub Edition which is now available for preorder in limited quantities at a recommended retail price of £89.99. Included in the Super Dangerous Wub Wub edition is a 12 inch Dub Step gun replica, an awe-inspiring 8 inch Johnny Gat Memorial Statue, and a pocket-size Dubstep Doomsday Button so fans can drop bombs on the go.

Fans purchasing the collector’s edition will also receive all in-game items from the Commander in Chief pre-order bonus, which include a Screaming Eagle VTOL that fires rockets out of its talons and can invoke the “Sonic Scream” attack, a limited edition American iconic ‘Uncle Sam’ uniform decked out in the American flag colours and a stimulus package of epic proportions – the ‘Merica gun – everyone’s American dream weapon. 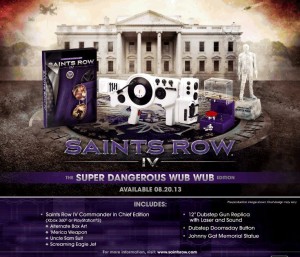