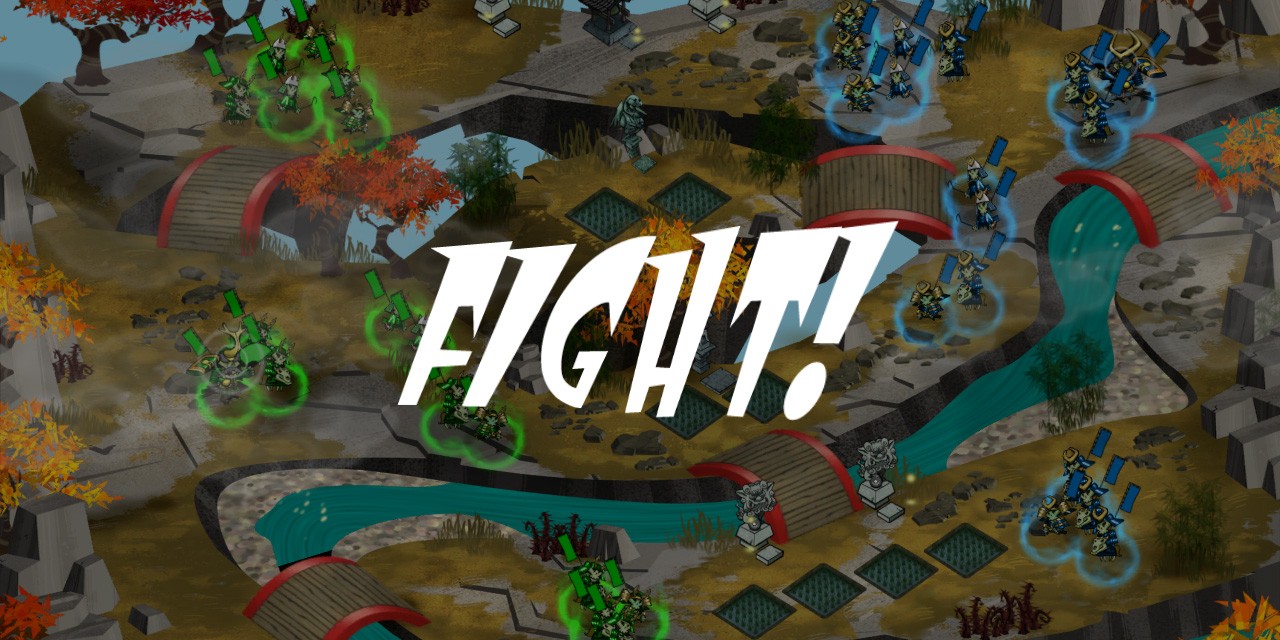 Story and setting are the most impressive qualities of Skulls of the Shogun. You take on the role of the recently deceased General Akamoto, a heavily mustachioed warlord who has been sent to the land of the dead by a backstabbing underling named Kurokawa. Said betrayer is soon dead too, as it goes, so off you set through a surprisingly verdant afterlife in search of revenge and the acclaim that’s rightfully yours. When you begin your matches you start with just four available soldiers types: Cavalry, a mounted unit that has a fair variety of movement, but cannot attack with power; Infantry, your front line, hand-to-hand combat unit; Archer, which excels at long-range attacks; and your General, a powerful commanding unit. If the General dies, you lose. Placing your troops requires a bit of strategy as you have a number of different troops with varying abilities. For example, infantry troops are perfect for absorbing attacks from enemy troops. Archers are better at sniping enemies from afar. As you go deeper in the game new units will appear in the shape of Fox Monk and the Salamander. There are different Monk types featured in the game, which can cast healing and defensive spells The strategic mechanics are quite straightforward and its gets you only a while until you totally engage with them. You proceed through the land of the dead one mission at a time, starting at the coast and continuing through chapters set in regions based on the seasons. So you venture into a spring land loaded with cherry blossoms, a steamy summer jungle, a golden autumn forest, and snowy winter tundra. Each land features a handful of turn-based scenarios where you wage war with enemies for the right to move on. What sets apart Skulls of the Shogun from its competitors besides the asynchronous multiplayer is that instead of the grid-based combat of an Advance Wars or the hex-based layout of other strategy games, Skulls of the Shogun is circular in its movement. Units can move within a certain radius while advancing through a map.Visually this is perfectly suited with the cartoon aesthetics of Skulls but it’s not as accurate as we would like it to be. Every time a unite dies bravely in the battlefield he leaves his skull that can ne eaten by your troops or your enemies giving you extra HP. If you eat 3 of them your powers are upgraded significantly giving you one extra assault per round and a wider circle to perform your attack. It is worth mentioning here the General’s unique twist. If you leave him idle at the start of the match, his hit points will increase, up to a maximum amount. Move him too early and you may send an unnecessarily weakened General out onto the field. But given his strengths as a unit, a full-scale attack right from the get-go might just be crazy enough to work. If a troop eats more than 3 skulls then it gains a “demon status” which means more health and attack points. What should you be aware of is that all these powerful attacks can be prevented since Monks can cast Purify on the skulls of downed friendly units, sending them into the ether—so these super units are appropriately bad-ass. In the single player campaign the enemies’ AI is quite advanced and finding your perfect strategy will require a lot of trial and error. Skulls of the Shogun also features up to four-player local and online multiplayer battles. The multiplayer mode named “Skulls Anywhere” pits up to four players against each other in a strategical samurai free for all. You can invite friends to play via Xbox Live on any Windows 8 platform. The game sends a notification to each player once someone completes their turn. Users then watch the previous users moves in a sped up sequence and then are free to make their moves.

Skulls of the Shogun is a lush, colorful game surprisingly pretty for a turn-based strategy title that can appeal to any type of gamer as it’s quite simple but also comes with a great amount of depth. It’s style is unique and not something that you find in every day games. If you’re looking for a tactical, turn-based strategy title that’s oozing charm, humour and playability without sacrificing depth, Skull of the Shogun is worth the investment, This is a must for light-hearted fun alone or with friends.

Skulls of the Shogun is priced at $14.99 on Windows 8 and Surface and $6.99 for Windows Phone (discounted to $4.99 at launch). The Xbox Live version sells for 1200 Microsoft Points, or the equivalent of $15, in the Xbox Live Marketplace.