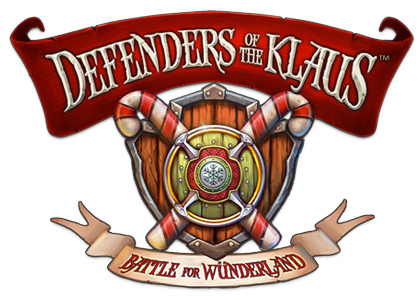 Atomic Chimp Games has launched a Kickstarter to launch their new game, Defenders of the Klaus. The story behind the game is based upon a new legend that is sure to become a favorite. The magical effects and fun, addictive gameplay are sure to keep your family entertained this holiday season.

Defenders of the Klaus is an action packed arcade style game where you play as Sprokket, a brave inventor elf, and his Santa mech robot, the Kringle3000. Your goal is to defend the North Pole and Santa’s Würkshop from the invading Orks of the North who plan to stop Santa’s midnight ride and delivery of toys forever. This is an ideal game for kids and adults alike. The gameplay difficulty can be adjusted to meet your desired level of challenge, whether that is slow and easy or fast and furious. This one of a kind holiday game is filled with hilarious Christmas themed items and holiday spirit.

The story behind this new holiday favorite was conceived by Michael Ingrassia, President and Creative Director of Atomic Chimp Games. Looking back at the development with his small, talented team of five key members, “Over the last year, my team and I have poured our hearts and souls into the development of Defenders of the Klaus to create a truly unique and original game that is as addictively fun to play as it is to look at, and I feel that we have exceeded expectations.” This game, crafted by a small team reflects the quality you would expect from a big name developer. Atomic Chimp Games is out to prove they are a contender. Watch for more great projects from this studio!

Among the plethora of cool features in Defenders of the Klaus are the POV camera and ability to invoke Santa’s Helpers. Players are able to switch their camera view during gameplay to change from a first person to a third person over the shoulder view. Both views offer very different perspectives and can change how you play the game. Once you have unlocked your Santa’s Helpers, Blitzen and Dasher, you can call upon them for assistance at any time. Blitzen is a bombardier “glider” elf who flies over the Ork army releasing figgy pudding sticky bombs. Dasher is a “scout” elf who slides quickly through the Orks in her rocket propelled ski bucket, armed with plenty of tinsel grenades. Both helpers are able to stop the naughty Orks in their tracks and clear the scene for you.

The Game will be available this Christmas season on PC, Mac, iOS and Android.

Although Defenders of the Klaus is launching this December, it is available for pre-order now on Kickstarter. There are a limited quantity of Super Early Bird specials and Kickstarter Exclusive unlocks available so don’t wait – check it out now.